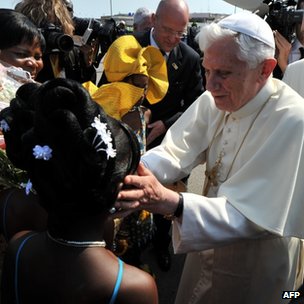 Huge crowds welcomed the pontiff at the airport in the city of Cotonou, where he was greeted with a 21-gun salute.
Although the number of Catholics in Benin is rising quickly, the majority of the population follow Voodoo, which was taken by slaves to the Caribbean.
Upon arrival, the Pope urged Africans to avoid the "unconditional surrender to the law of the market and finance". "Modernity must not cause fear, but it cannot be built by forgetting the past," he said.
The pontiff also spoke of avoiding "exacerbated and useless nationalism or tribalism that can become deadly, extreme politicisation, inter-religious tensions to the detriment of the common good or finally the erosion of human, cultural, ethical and religious values".
During his visit, the Pope is also likely to face questions about condoms.
On his 2009 visit to Africa, he sparked outrage among Aids activists by saying that handing out condoms could speed up the spread of HIV in the continent worst hit by the virus.
The Practical Buddhist Responds
OK, you have to overlook the 21-gun salute for a messenger of peace, and the triumphalism. You’ll have to turn a blind eye to treating the successor to the humblest apostle like any visiting monarch with a great wardrobe.  You also have to forgive the Supreme Pontiff for claiming that distribution of condoms in Africa would increase AIDS infections.
If you can get past that, his message is profound and beautiful. “Don’t surrender to the laws of the marketplace.  Avoid deadly nationalism. Don’t get mired in politics.” Elsewhere, Benedict speaks out for the poor and challenges the rich.

The packaging is a little contradictory, but the message is sublime. Like a good Buddhist, I want to be a beginner, a learner, and never to reject good teaching.
Posted by David McPhee at 9:52 AM