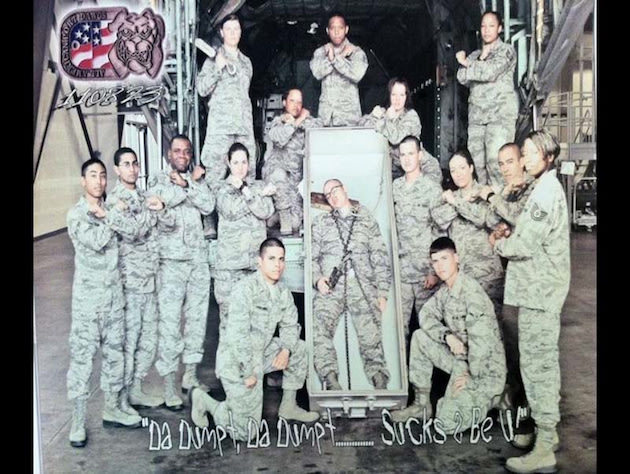 The Air Force Times received a copy of the photo over email, which includes the caption, "Da Dumpt, Da Dumpt …. Sucks 2 Be U." The casket is similar to those used to transport deceased U.S. soldiers home from the battlefield.

Well, I didn't respond. I reacted. What is this horrible picture and what does it mean? My gut churned with  a sour stew of war and death and hatred and and loss. Then I realized it was staged, of course. The boy in the coffin is really alive. The noose and the chains carry some message, as does the inscription DA DUMPT, DA DUMPT.....SUCKS 2 BE U!

The photo was made last August, but goes viral as President Omaba declares victory after 9 years of attrition in Iraq.

These warriors are kids, late teens some of them, with a lot training and a certain discipline, and maybe even combat experience, but not much sense. This is the dumb kind of thing bored or angry kids do. It also carries a big message, maybe much bigger than they intended or could fully comprehend, about desensitization to evil, about the power of group pressure, and about the glorification of military death, for starters.  It is likely to bring more pain to the loved ones of fallen soldiers, and makes the military look, well, stupid. Maybe that's the kids' intention:  I can't imagine what horrors they might have encountered.

You could say it's anti-war art. There have been dozens of graphic, terrifying anti-war movies.  But somehow the photo brings it too close to home for this practical Buddhist. The boys and girls in the picture could in fact be killed, and that's no movie.  Maybe it's really a powerful art piece, but it's too much for me.