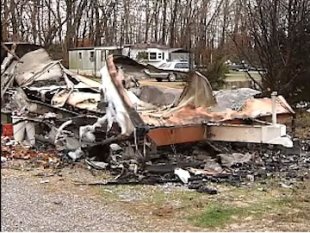 Vicky Bell's home after it was destroyed by a fire
A Tennessee couple helplessly watched their home burn to the ground, along with all of their possessions, because they did not pay a $75 annual fee to the local fire department.

South Fulton Mayor David Crocker defended the fire department, saying that if firefighters responded to non-subscribers, no one would have an incentive to pay the fee.
The South Fulton policy produced precisely the same nightmare scenario last year, when homeowner Gene Cranick--who had likewise failed to pay the $75 annual fee for rural Obion County residents--saw his house engulfed by flames as South Fulton firefighter watched close by. That incident sparked a debate among conservative pundits over the limits of fee-for-service approaches to government.
The Practical Buddhist Responds
The victims of the Holocaust perished at the hands of those following orders. Orders, rules, and regulations can never substitute for the values.  Instead they serve the lowest common moral denominator. Many situations demand obedience to higher principles.
If you were a firefighter, trained and suited up, would you stand idle by your truck and watch a poor family lose their home and all they owned because helping them was against the rules?
If you were the mayor, would you approve? Would you point out that this is what happens to people who pay their fees late?
Or would you use skillful means to find another solution, a way to reduce suffering?  Would you see that those who lost their homes suffer, but the firefighters who didn't help may suffer even more?
Here is Thich Naht Hahn's interpretation of the Second Precept:
The Second Mindfulness Training:
Aware of the suffering caused by exploitation, social injustice, stealing and oppression, I vow to cultivate loving kindness and learn ways to work for the well being of people, animals, plants and minerals. I vow to practice generosity by sharing my time, energy and material resources with those who are in real need. I am determined not to steal and not to possess anything that should belong to others. I will respect the property of others, but I will prevent others from profiting from human suffering or the suffering of other species on Earth.
Posted by David McPhee at 6:55 PM