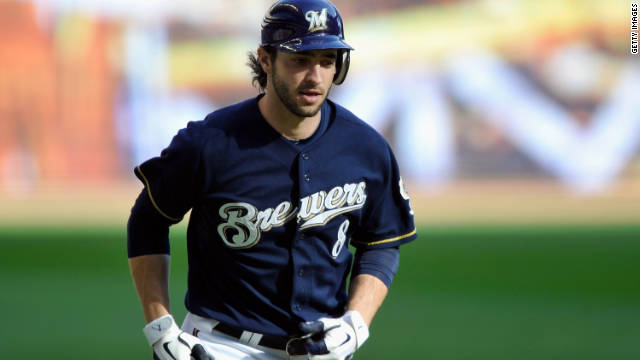 Ryan Braun rounds the bases on his two-run homer in the first game of the National League Championship Series in October.CNN) --


The National League's 2011 "Most Valuable Player," faces a possible 50-game suspension after a urine sample tested positive for a high level of testosterone caused by a synthetic substance, according to an ESPN report
THE PRACTICAL BUDDHIST RESPONDS
On a perfect Sunday morning, friends invited us to brunch at an upscale sports bar inhabited exclusively (until we arrived) by  white 30-somethings, all dressed with extreme and expensive care to appear completely casual.  They drank countless Mismosas  to the beat of dance music so loud we had to shout. Every inch of wall was covered by TV's tuned to various football games. I meditated on sports, while I violated the Fifth Precept by overeating pulled pork hash.
I meditated on sports in general and doping in particular. Why the outrage if a player uses performance enhancing drugs, as Ryan might have?
It's because, sadly, they are the real heroes in our culture, and our entertainment is spoiled if they don't play fair. They can  desert their adoring fans for more money and greener pastures, and spend staggering sums on themselves, but if they enhance their already their prodigious skill to entertain us, we are deeply betrayed.

We forgive our politicians for their outright lies and our clergy for their corruption.  We give a pass to actors and other entertainers for shameful lives. None of these are our heroes.
It's the professional athletes we expect so much of. Why?
What if
Posted by David McPhee at 9:00 AM