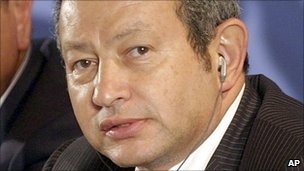 One of Egypt's richest men is to face trial for blasphemy after tweeting cartoons of Mickey and Minnie Mouse wearing conservative Muslim attire.
Telecoms mogul and Coptic Christian Naguib Sawiris re-posted the images on Twitter last June. He subsequently apologised, saying he meant no offence.
The tweeted images showed Mickey Mouse wearing a traditional Islamic robe with a full beard, while Minnie Mouse is wearing a niqab - a full-face veil - with just her eyes showing.

The Practical Buddhist Responds
Mr. Sawaris should have had more sense. Religious symbols are almost hard-wired, and in times of trouble they become precious. Attack or mock my symbol and you attack or mock me, my family, and all that supports and comforts me.  Remember the huge flap when an "artist" suspended a Christian crucifix in urine, and the NEA was supposed to pay for it?  Right now in Egypt there are major tensions between the majority Muslims and the little group of Copts. These upsets reflect the uncertainly and upheaval in this land-in-flux.  Not smart to tweet Minnie wearing a niqab.

Buddhists are pretty reverent people, and the reverence extends to folks of different faiths and their practices. They are also very tolerant (except in Thailand where you can go to prison for dissing His Majesty the King.)
Mr. Sawiris is a leading "secularist."  If he wants to keep leading he needs to learn and show profound respect for the religious symbols that will always surround him in Egypt.  Otherwise, he will lose his influence.
Look at Turkey, which is a world center for religious moques and shrines. They've got their problems, but they've learned to revere ancient symbols while maintaining a secular state.
Posted by David McPhee at 10:03 AM