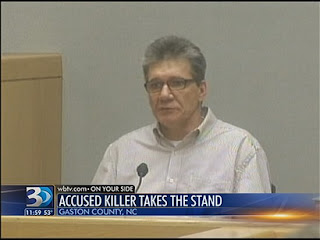 Danny Hembree, 50, is on death row at Central Prison in Raleigh, N.C., but he's not looking for any pity in the letter he sent to The Gaston Gazette.
"Is the public aware that I am a gentleman of leisure, watching color TV in the A.C., reading, taking naps at will, eating three well balanced hot meals a day," Hembree asked in the letter. "I'm housed in a building that connects to the new 55 million dollar hospital with round the clock free medical care 24/7."

Danny is correct of course, on all counts. He brutally killed a teenage girl, and allegedly at least two other women.  He taunts us by describing death row  advantages we don't have out here, and reminds us it will probably take decades for North Carolina to kill him.

Why do we do this crazy stuff? We are on a global short list for completed executions, just after Iran, Saudi Arabia, and Iraq.  (No one knows for sure about the champion, China, but most experts believe their numbers are in the thousands). Seems we're the only ones who house in relative luxury those we plan to kill, and wait so  many years to pull the switch or insert the needle.

It's because we want to do it in icy cold blood. With slow ceremony and ritual and endless rules and interminable debates on which death drugs are more humane. The alternative -- a quick trial and a quicker death while passions for vengeance  are still flaring --  not for us.

It's the opposite for the murderers. If they kill in the heat of a moment, sentences are lighter.  If they think it through and plan it, it's first degree and we can kill them in return, at least in all but 12 states and D. C.

There's no good science to say capital punishment deters. There's plenty of science to show it's unevenly applied.  It's still very popular in some quarters, but so are dozens of things that are bad for our society.

Why do we keep doing this crazy stuff?