Everybody knows that Dr. King relied on the teachings of Ghandi, but in his later years, he was deeply influenced by Thich Nhat Hanh.  King (Peace Laureate himself in 1964), wrote the Nobel committee three years later and in a long and moving letter proposed Thich for the Peace Prize. 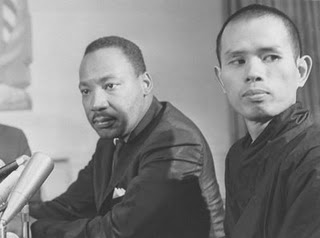 "The moment I met Martin Luther King, Jr., I knew I was in the presence of a holy person.  Not just his good work, but his very being was a source of great inspiration for me ... On the altar in my hermitage in France are images of Buddha and , and every time I light incense, I touch both of them as my spiritual ancestors ... When you touch someone who authentically represents a tradition, you not only touch his or her tradition, you also touch your own . . . When those who represent a spiritual tradition embody the essence of their tradition, just the way they walk, sit, and smile speaks volumes about the tradition."
~Thich Nhat Hanh, "Living Buddha, Living Christ"~

**After visiting the U.S. and Europe in 1966 on a peace mission, he was banned from returning to Vietnam in 1966. On subsequent travels to the U.S., he made the case for peace to federal and Pentagon officials including Robert McNamara. He may have changed the course of U.S. history when he persuaded Martin Luther King, Jr. to oppose the Vietnam War publicly, and so helped to galvanize the peace movement. The following year, King nominated him for the Nobel Peace Prize. Subsequently, Nhat Hanh led the Buddhist delegation to the Paris Peace Talks.  (http://cof-interspiritual-mindfulness.blogspot.com/2011/01/thich-nhat-hanh-on-martin-luther-king.html
Posted by David McPhee at 9:13 AM