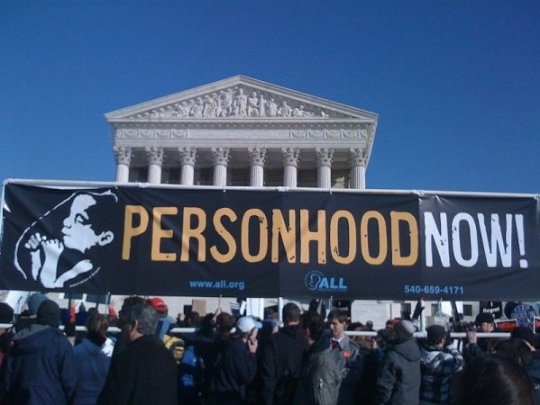 ·
In November, 2011, Mississippi voters soundly defeated a proposed amendment to the state constitution, which many had expected to pass. It would have determined that human life (personhood) begins at conception. While passage would have created a legal nightmare of challenges and counterchallenges, the amendment captured an idea of great importance.


Shortly before the vote, I reprinted here an important article from the fascinating literature of Buddhist bioethics. The bibliography is amazing.


Because of latest Santorum dust-up -- his wanting to 'throw up' on the First Amendment, I'm reprinting it now.


Because there have been many hundreds of pageviews for this article, I've turned on the comments so you can share your views if you like.


Published in the Journal of Buddhist Ethics, Volume Two, 1995

Buddhism, like all religious and secular philosophies, focuses on two central questions concerning abortion: (a) when does the embryo or fetus acquire the property which makes termination of pregnancy "killing"?; and (b) is termination of a pregnancy, before or after this point, ever justifiable?

While there was a minority tradition in classical Hindu embryology that held that incarnation does not occur till as late as the seventh month (Lipner, 1989), most Buddhist commentators have adopted classical Hindu teachings that the transmigration of consciousness occurs at conception, and therefore that all abortion incurs the karmic burden of killing. Before modern embryology, however, in both Buddhist countries and the West, ideas about conception were scientifically inaccurate, and often associated the beginning of life with events in the third or fourth month of pregnancy (for a discussion of traditional Tibetan embryology, see Dhonden, 1980 and Lecso,1987).

Another problem in early Buddhists' embryology is their assumption that the transmigration of consciousness is sudden rather than gradual. Based on the findings of modern neuro-embryology Buddhists today might maintain that the fetus does not fully embody all five skandhas and the illusion of personhood until after birth; this is the argument developed by most Western ethicists to defend abortion (Tooley, 1984; Flower, 1985; Bennett, 1989). If the fetus is not yet a fully embodied person, then the karmic consequences of abortion would be even less than the killing of animals, which Buddhism teaches do have moral status. This neurological interpretation of the skandhas may be more consistent with Western Buddhism, which often sees the doctrine of rebirth as peripheral or interprets rebirth metaphorically rather than literally (Batchelor, 1992; King, 1994).

The second question is whether abortion always generates bad karma, or in Western terms, is it ever "justified." This relates to the debate about whether Buddhist ethics are absolutist, utilitarian or "virtuist," i.e. seeing the good in the development of personal qualities. The absolutist would hold that bad karma is incurred from any act of murder, whatever the justifications. The utilitarian would argue that murder can be a compassionate act with positive karmic consequences, taking into account factors such as the health of the fetus or mother, the population crisis, and the readiness of the parents to raise a child.

A virtue-oriented Buddhist would argue that the attitude and motivations of the pregnant woman and her collaborators would determine the ethics of an abortion. Along this line, Tworkov (1992) argues that the karmic skilfulness of an abortion is related to whether the person became pregnant and made her decision to abort without serious mindfulness. From this perspective, aborting a fetus conceived without an effort at contraception would be more karmically significant than an abortion necessitated in spite of contraception.

The much discussed Japanese tolerance for, and ritualization of, abortion appears to combine both utilitarian and virtue approaches. The Japanese believe that abortion is a "sorrowful necessity," and Buddhist temples sell rituals and statues intended to represent parents' apologies to the aborted, and wishes for a more propitious rebirth. The Japanese have reached these accommodations consensually, with little debate, and without discussion of the rights of women or the unborn (LaFleur, 1990, 1992).

The Theravaadin commentator Buddhaghosa appears to have combined all three views. He held that killing produces karma jointly through the mental effort and intensity of the desire to kill, and the virtue of the victim (Florida, 1991). Since killing big animals required more effort, and was therefore worse than killing small animals, the karma of feticide would be less than murder of adults, and less in earlier stages of pregnancy. On the other hand, for Buddhaghosa, the karma of feticide would be greater than that of killing villains in self-defence.

Buddhists have thus far given little thought to the third important question, the connection between morality and law, specifically how, and on what grounds, the state should regulate abortion. Some Buddhists have adopted the stance of many moderates in the West: abortion is murder of a person, but women should have that choice (for instance, Imamura, 1984 and Lecso, 1987). Since most Buddhists have no problem with laws to discourage and punish murder in general, implicit in this position is that murder is either justifiable when it conflicts with bodily autonomy or, since few Buddhists would imprison butchers, that fetuses are closer in status to animals. Clearly there is much room for clarification of the
relationship between religious ethics and law in pluralistic societies.


Some scholars (such as Ling, 1969, and LaFleur, 1992) have looked beyond the strictly ethical concerns with abortion to examine the cultural aspects of the question. From this perspective it is sometimes pointed out that Buddhism is not "pro-natalist," i.e. does not hold that reproduction is a religious duty - quite the reverse in fact - and does not advocate "family values," at least in the sense that Confucianism did. Buddhist skepticism about family and reproduction was a central cause of Confucian and Shinto persecution. The Sinhalese embrace of contraception and abortion was so enthusiastic in the 1960s, compared to Sri Lanka's Muslims, Catholics and Hindus, that racialist monks began to argue that Buddhists had an obligation to "race-religion-nation" to reproduce.

WRITINGS ON EMBRYOLOGY, REBIRTH AND KARMA

BUDDHISM ON SEXUALITY AND CONTRACEPTION The Wall Street Journal
February 26, 2012
WASHINGTON -- Republican presidential hopeful Rick Santorum said during television interviews on Sunday that he "almost threw up" after reading President John F. Kennedy's famous 1960 speech on the separation of church and state.
"I don't believe in an America where the separation of church and state is absolute," Santorum said on ABC's "This Week." "The idea that the church can have no influence or no involvement in the operation of the state is absolutely antithetical to the objectives and vision of our country."

The Practical Buddhist Responds
Is Santorum that clueless, or that cunning?  When I first saw the news report I thought it was a clever spoof from the Onion, but it's real. To smear a popular dead president is one thing. To twist a central tenet of the Constitution --that's scary. Santorum followers -- some of whom  have never read the Constitution and who use a distorted religion to marginalize the different and justify aggression -- will eat it up.  They don't want religion to influence the government, they want their views made law.  Instead of exercising their rights to teach and preach and influence government, they want to sit back and elect leaders who promise a theocracy.
Name one theocracy, current or past, with a free citizenry.
Faith influences leaders, of course, though perhaps not as much as they claim.  But when organized religion gets in bed with the government, the results are always bad for both, and throughout history has led to loss of freedom of religion, every time.
That's why they call it the Bill of Rights. Separation of Church and State by the "absolute wall" JFK talked about protects our rights to worship, picket Planned Parenthood, or fight slavery in the name of faith.
The First Amendment makes Rick want to vomit, but it also protects his right to worship and believe whatever he likes, and and to say pretty much anything he wants. That should serve as an effective anti-emetic.

Posted by David McPhee at 6:41 PM No comments: 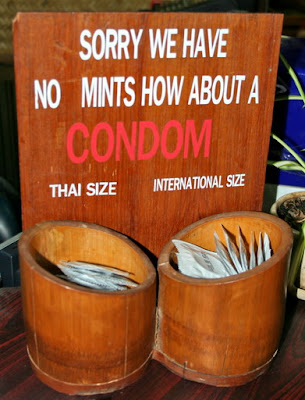 Buddhists like fertility and are a little hesitant about contraception if it's for selfish purposes, but they preach compassionate family planning. Thai Buddhists can be a little shy about sex topics, and tend to be embarrassed about condoms.

The typically Thai solution is practical.

Mechai Viravaidya, a famous Thailand politician, points out that monks often pray over and sprinkle holy water on condoms destined for the provinces.

You'd have to know Thai psychology better than I do to tell how far Mechai's tongue was in his cheek, but there's no doubt he's promoting condom use through Buddhist teachings.  In contrast, the founder of Thailand's most famous restaurant chain is not kidding at all.The chain is Cabbages and Condoms. I've eaten there often.  The food is good and cheap (and "guaranteed not to cause pregnancy.") It's also served with free condoms, the founder's  very serious contribution to healthy contraception and STD control.
Posted by David McPhee at 9:08 AM No comments: 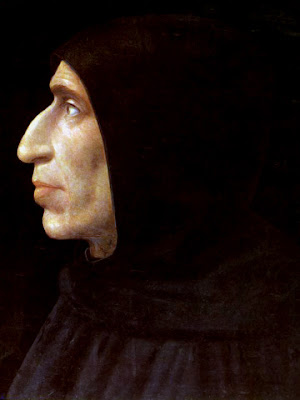 The Republican debates. I watched them all. Santorum both fascinated and repelled.

Well not so much Santorum --- he's just a jumped-up demagogue with a lot of energy -- but those who wave signs and cheer him on.

Savonarola famously burned books and preached his version of morality while he played Florentine politics, until he was executed at the turn of the 16th Century. He used hate, veiled with Catholic exceptionalism, to fuel his rise to power.

My friend Gordy emailed me about Santorum today. Here's a little of what he wrote:

Maureen Dowd, a Catholic, devoted her column in this morning’s New York Times to “Rick’s Religious Fanaticism.”  She said

“Rick Santorum has been called a latter-day Savonarola.

“That’s far too grand.  He’s more like a small-town mullah.”

She recalls Santorum’s 2008 warnings about Satan’s activities here in America, how Satan bores his insidious way into our souls via our vices, like pride, vanity, and sensuality…  Dowd:  “When, in heaven’s name, did sensuality become a vice?  Next he’ll be banning Barry White.”

Yet, I’m troubled by how people react to him and I regard the resistible rise of Richard John Santorum with a mixture of dread and horror – and yes, fascination.  For one thing, even if he loses his bid to be the GOP nominee, he will count the loss as a valuable sacrifice to the cause – it’s just that the Lord needed to do some more prep work before he comes marching in brandishing his terrible swift sword

Fifty-two years ago, if John Kennedy had espoused any one of the ideas that Santorum has expressed in, let’s say, just in the last week or so, the hue and cry for the wholesale roundup and exile of American Catholics would have been well underway by the end of the year.

I wish Socrates were here for the debates instead of cowering John King because I think Socrates had a Buddhist heart.

I wish there was someone who could apply the Socratic method of questioning to the debaters and watch their arguments collapse under the scrutiny of thoughtful questions.  The Socratic method has its own patient and extraordinarily insidious method of arguing – respecting, not demonizing, the opponent, all the while exposing his errant ideas to the unrelenting light of reason.

Posted by David McPhee at 1:17 PM No comments: