Ashamed of Your Atheism? Come Out of the Closet. 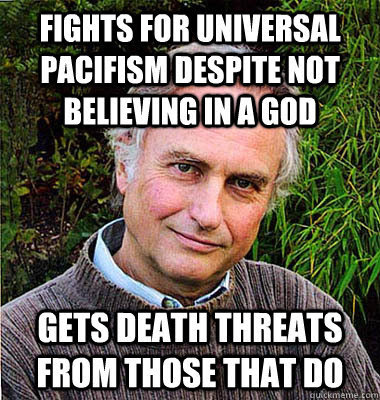 Richard Dawkins in not some crank. He's one of the foremost ethologists and evolutionary biologists of our time.

He is also a very intentional thorn in the side of religious people and their leaders.

Dawkins has proposed that  the current pope be tried as a war criminal for many offenses including opposition to birth control in poor nations (where the alternative for limiting population is starvation.)

After 9-11 he was quoted in the Guardian:

He's right.  We have no problem arguing public policy, vigorously and endlessly. Why is religion so, um, sacrosanct?

Why are atheists more fearful of coming out of the closet than gays?  Buddhism has no god, and Hinduism doesn't require one, so apparently godlessness can be respectable. But for God's sake, don't tell my parents!